Forum for discussion about the UltraSmartCharger created by Paul Allen!

A place for posting test results and reviews for the wide variety of batteries that are available.
Post Reply
5 posts • Page 1 of 1

For this test, I took a pair of Ikea Ladda NiMH AA cells and cycled them at 2 Amp charge and discharge rates until they could no longer handle a 2 Amp discharge. For every 50th cycle, each cell was charged from empty at 1 Amp, given a 100 mA top off for 2 hours and then discharged at 400 mA before being recharged again at 1 amp. Rest periods were 20 minutes after charging and 10 minutes after discharging. 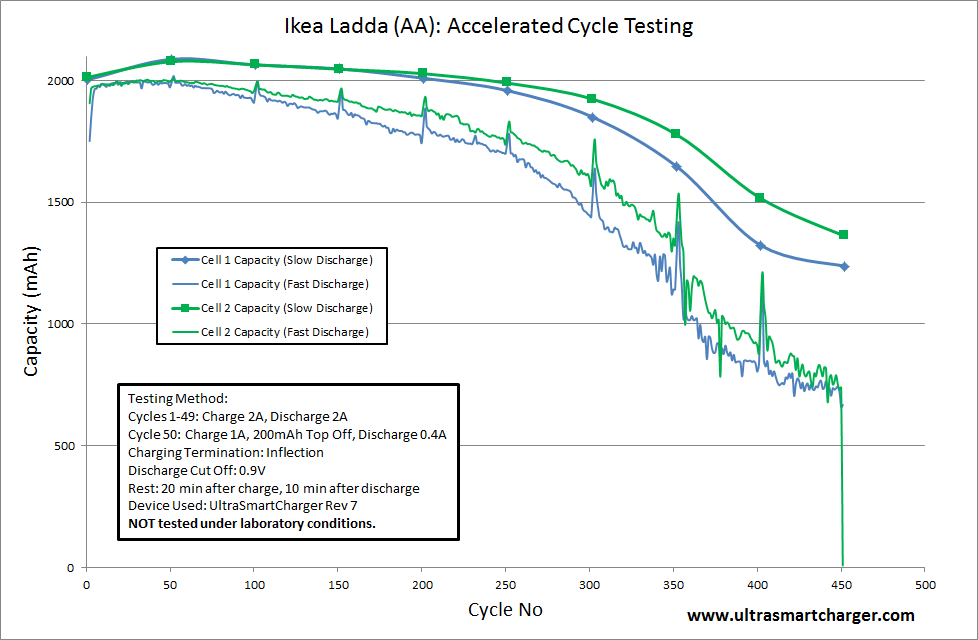 Considering the fact that this test was more extreme than the standard IEC cycle testing method, these cells performed very well. In many respects, they performed better than the 1st Generation Eneloop cell that I previously tested (here) – initial capacity was higher at both high and low discharge rates – the cells actually exceeded their rated capacity during the slow discharge tests over the first 200 cycles. Even when discharging at 2 Amps, they very nearly met their rated capacity for the first 50 to 100 or so cycles which I think is quite impressive. Both cells also managed about 450 cycles before failing the high rate discharge compared to only about 375 cycles for the 1st generation Eneloop. The Ikea cells very nearly met their rated number of cycles whereas the 1st generation Eneloop only came to about 37% of its rated cycles. It should be noted however that these figures aren’t directly comparable – The Eneloop cells were tested at a hotter time of the year and the testing method was also a little different. The 1st Generation Eneloop cell was also about 8 years old at the time of the test compared to the Ikea cells which were about 18 months old.

I’m very impressed by the performance of these Ikea cells – especially when taking into account their cost – only AU$5.99 for a pack for 4! Eneloops on the best special in Australia cost about $20 for a pack of 8 – i.e. $10 for 4 of them. The Ikea cells are no less than 40% cheaper than the best price on Eneloops – and that is their normal everyday price! Comparing the normal price on Eneloops, you can usually buy 4 packs of the Ikea cells for the cost of 1 pack of 4 Eneloops, and still have change left over.

The main drawback to the Ikea Ladda cells is their poor availability in Australia. There are literally only 5 stores that you can purchase these cells at this price in the whole country and you can't order them online. (There are additional stores in Perth and Adelaide, but for some inexplicable reason, the price in those stores is more than quadrupled at $25 per pack!) Even if you are lucky enough to live within a reasonable distance of an Ikea store, you then have to contend with the fact that the stores are intentionally laid out to make you walk long distances through the store – it’s essentially impossible to run in, grab what you want and then check out!

Other than their poor availability, the Ikea cells have higher self discharge (and are less consistent) compared to Eneloops with capacity results out of the packet at: 1285, 1310, 1291 and 1075 (mAh) These cells were about 14 months old when I took them out of the packet, but since it's not known how full the cells are originally charged at the factory, it doesn't really give us too much information about their self discharge rate. After 30 days sitting idle, the cells had 85%, 86%, 86% and 83% remaining. The last cell may just be an outlier - it had the highest capacity of the 4 cells when freshly charged, but also had the highest self discharge which meant that even after only a month, it ended up with less capacity than the rest of the cells. I don't know if cells like this are common with the Ikea brand, but it's a bit of a concern if they are. I haven't yet had these cells for long enough to do a 6 month self discharge test, but elsewhere it has been reported that they found that the cells had 72% remaining after 6 months which seems to be inline with the results that I have seen so far.

Overall, I recommend these cells! Considering their cheap price, I think that they're a much better choice than to continue using alkalines - it's possible to spend more on a pack of 4 name brand alkaline cells at the supermarket! For situations where longer cycle life or lower self discharge are important, I would still recommend Eneloops ahead of these.


A few notes on this test:

Ambient temperatures for this test were quite low a lot of the time – the testing concluded in the middle of Winter in Australia. By warming up the room that the cells were being tested in, it was possible to get them to run through the 2 Amp discharge test even after they had done 450 cycles – I managed to get these cells to do another 50 or so cycles which I haven’t shown on the above graph. Warmer weather would have meant that the cells would have been able to keep running without having to heat the room, but it’s likely that higher ambient temperatures would have also resulted in the cells lasting less cycles because heat is a likely contributor to cells degrading.

Due to an error on my part, both cells went through about 30 (incomplete) cycles before the test was properly started – I haven’t included these cycles in these results since they probably wouldn’t have degraded their performance by much if at all. If they did impact the cycle life test, then that only improves my opinion of these cells! (I didn’t expect these cells to last so many cycles, so I was originally planning to run these cells as a test run and then restart it later with a new pair of cells)

Due to some poor quality connectors, some of the discharges were done at a bit less than the intended 2 Amp rate – I don’t think that this has affected the test results significantly however. For the last part of the test, I replaced the connectors with new ones that are gold plated and this resolved the problem.

For this test, I had the external constant current load sitting to the left of the charger - I suspect that this probably caused the 1st cell to average higher temperatures compared to the second cell and may explain why its capacity degraded faster. For future tests, I am locating the external load as far away from the charger as reasonably possible.
Top

Unfortunately, I don't think that these cells are still available for purchase anywhere, so this probably isn't of too much use to anyone any more...

I did leave a pair of these Ikea cells sitting for 12 months - one dropped down to 1056 mAh - the other dropped to 454 mAh - I suspect that the later cell was damaged (e.g. dropped) some time before I purchased it as it also had a somewhat lower capacity out of the packet.

So, even looking at the better cell, self discharge was still quite poor compared to Eneloops. The cells would have still been good for uses where they would see fairly regular use.
Top

The stores are now selling 1000 ma AA batteries and 2450 AAs as well. The 1000s might be the Eneloop lite which normally has not been sold in USA.
Many users elsewhere (other sites) seem to feel the 2450 might be Takasaski FDK PRO also. Made in Japan anyway.
Top

Found someone who had performed some testing on the new LADDA batteries.
Only test for discharge graph (single) and capacity just out of wrapper and after a few cycles.
It is a google translate from Russian..so the language is 'non optimal'